Wake up Jinna, you’re in Iceland.

The feeling of starting this journey and the processing of all of the emotions that come with leaving my apartment, job, friends and family back home in the states to backpack Europe for a month was delayed until I realized I was sitting in a seat on Iceland Air and landing at Keflavik International Airport.

WAKE UP JINNA, YOU’RE IN ICELAND. Leaving for Iceland in mid-April couldn’t have worked out better in terms of mid-air comfort. The plane was on-time, the flight took less than its intended five hours and I saw more empty seats than filled ones. Unfortunately, I didn’t spot them fast enough due to me being stuck in the middle (Tineey got lucky with the window seat – P.S. she’s tagging along with me during this entire trip). I also had the pleasure of sitting next to an older man who probably didn’t notice how pungent he smelled. Lucky for me, New York City has taught me to get used to breathe with my mouth open.

Even luckier for me, he happened to realize that empty seats meant he could sit somewhere else and not next to two chatty Asian-American girls. He moved. I started breathing with my nose again. So now we’ve got one extra seat, an endless selection of movies (including The Hobbit, what!) and way too much to talk about. I should have slept during that flight since we arrived in Keflavik Airport at 5:40 AM, and we weren’t scheduled to start our first day until around 9 AM. Keflavik Airport is modern, with clean lines, cool architecture and one thing that makes it better than any other airport that I’ve been to (feel free to remind me that I’m a complete travel noob) – it has free wifi.

We parked that carry-on suitcase and my massive > 10Kg backpack, and tried out some Icelandic Airport breakfast. Is beer for breakfast a thing out here? Not sure, but I saw more than 4 people drinking bottled beers at 6 AM. I went straight for the coffee.

We were also definitely confused about the ISK currency (Tineey more than me since she got stuck paying almost $21 for what she didn’t realize was an all-you-can-plate breakfast) – I ended up downloading a currency converter app on the spot to help with budgeting. Found one of the many empty tables with outlets, got out our currency converters and electronics and killed some time on the internet before heading out to explore. Two purchased tour tickets later, we headed out to hop on the bus taking us to one of the most magical spas in the world. That’s coming next.

But before you go, wherever you’re reading from, whatever you’re doing in your life to find happiness, and whoever it is that you are, remember this:

“TRAVEL IS THE ONLY THING YOU BUY THAT MAKES YOU RICHER.”

Can’t wait to take you guys on this journey with me! P.S. sneak peeks are on my instagram: @projectinspo. 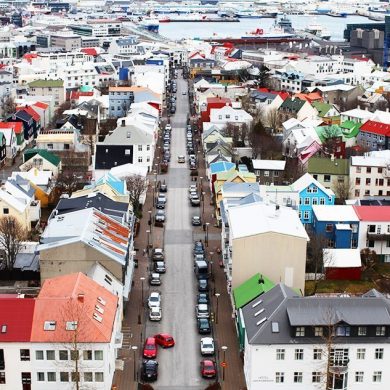 5 Things You’ve Got to Do in Reykjavik, Iceland